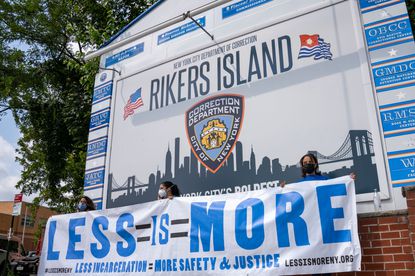 Outside intervention is needed to stabilize New York City’s beleaguered jail system, says the federal monitor overseeing it, blaming the Department of Correction for making no progress over the past month.

Detainees have received blows to the head and pepper spray blasts amid lack of supervision during a shocking increase in use of force by guards, according to a letter monitor Steve Martin filed late Thursday with Manhattan federal court.

The use of force on detainees jumped last month by 450% — from 70 in August 2020 to 190 — and was centered in the intake sections where the DOC has allowed a large backlog to fester. That has left detainees without a bed for a week or more.

“We are gravely concerned that the Department has made no appreciable progress to ameliorate the dangerous conditions in the jails,” the letter stated. “This troubling state of affairs certainly calls into question whether Department leadership possess the level of competency to safely manage the jails.”

The missive came after the city’s jail system saw its 12th death so far this year.

The crisis prompted the de Blasio administration to release an array of plans over the past week. Those include speeding up intake, increasing access to medical treatment, leaning on staff to return to work and lessening the population through limited releases and moving sentenced inmates upstate.

“Stated bluntly, the City’s and Department’s plans are not sufficient to address the imminent risk of harm to people in custody and Staff flowing from the poor operation of the jails, including Staff failing to secure doors, abandoning their posts, or continuously engaging in a whole host of dangerous security,” the letter stated.

Martin’s letter claimed correction officials “rebuffed” his team’s pleas over the past month to improve security. It recommended a search outside DOC for more “skilled” people to run individual jails, including an “external Security Operations Manager with significant expertise in correctional security.”

“The significant deterioration in safety, the ubiquitous poor management, the systemic dysfunction, and the corresponding harm to incarcerated individuals and Staff has led the Monitoring Team to conclude that the Department does not have the requisite internal capacity to manage the security functions necessary,” the monitor wrote.

Also on Thursday night, state Attorney General Letitia James signaled in a letter filed with the court that her office was getting involved.

“The accounts of chaos, dysfunction and violence that have been reported by incarcerated individuals and correctional staff are deeply disturbing,” Assistant Attorney General Conor Duffy wrote.

“We have seen encouraging improvements to intake as a result,” a DOC spokesman said.

A court hearing in Nunez vs. City Department of Correction, the 2011 class action lawsuit that led to the appointment of the monitor, was slated for Friday morning.