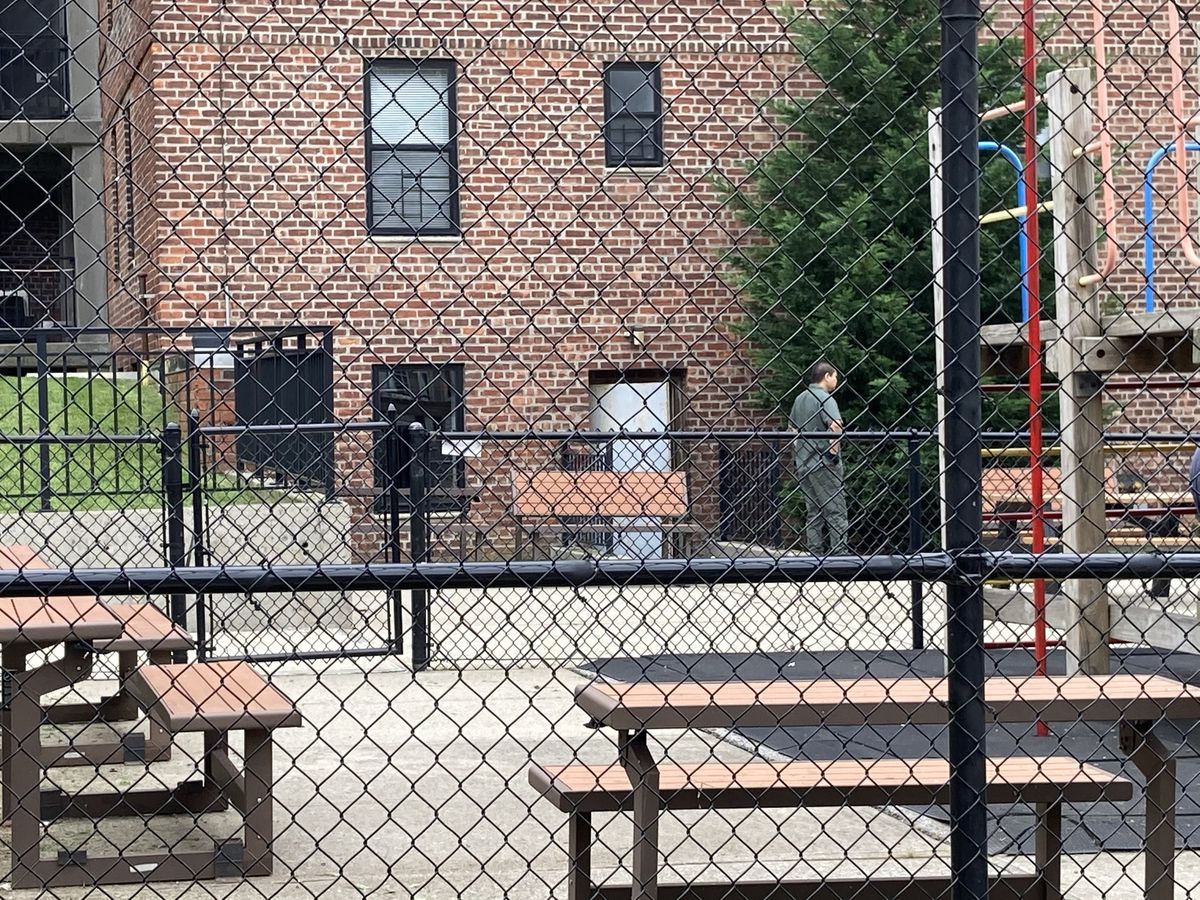 Federal inmates in Brooklyn are paid a pittance to fix up the homes of their jailers, toiling in a work detail that one former inmate compared to slave labor.

The incarcerated handymen from the troubled Metropolitan Detention Center in Sunset Park are shipped 3½ miles from the jail to Dayton Manor, a housing complex in Bay Ridge for Bureau of Prisons staff. Once there, the inmates scrub toilets, install plasterboard, paint the walls and handle other basic renovations in apartments and common spaces, sources said.

“It’s kind of like working on the plantation house, right? That’s pretty obvious,” said Mark Colville, an anti-war activist who was incarcerated for three months at the Metropolitan Detention Center for vandalizing a Navy base. Colville, released in September, never worked at Dayton Manor, but knew people who did.

The Bureau of Prisons declined to tell reporters how much inmates are paid for work at Dayton Manor. Incarcerated workers in the federal prison system can make as little as 23 cents an hour and as much as $1.15.

“The wages or the salaries I was hearing just for the work in general there was anywhere from $30 to $60 per month,” Colville, 60, said.

Despite the low wages, the Dayton Manor detail is one of the most desirable assignments at the Metropolitan Detention Center, sources told The News. The job offers a rare opportunity to get out of the notorious lockup and work on Fort Hamilton Parkway in the relatively quiet Brooklyn neighborhood, Colville said.

“In the context in which they’re living, Dayton Manor and some of these other outside jobs is a privilege you don’t want to lose,” he said.

At least one former inmate agreed.

“I was in the cadre, and every once in a while I got to go to Home Depot, Dayton Manor or [the] Fort Hamilton [Army base],” a former inmate wrote on a message board about the Metropolitan Detention Center in 2011. He called the gig a “real plus” in his otherwise “pure hell” stint at the jail.

The cheap labor arrives five days a week and remains from 7:30 a.m. to 2 p.m. at the seven-story complex with a view of the Verrazzano Bridge, according to a Bureau of Prisons handbook.

Monthly rent for a two-bedroom apartment at Dayton Manor ranged from $1,250 to $1,350 in 2010, according to internal Bureau of Prisons emails revealed in a lawsuit over an eviction at the building.

On Thursday, a man in a dark green jail uniform exited the building and took a seat on a bench outside, resting in the sun with no correctional officer in sight.

The inmates who work at the complex are part of a lower-security section at the Metropolitan Detention Center where people serve the final portion of their sentences before being released. Most inmates at the lockup are awaiting trial.

The inmate crew is supervised by the jails facilities team and sometimes works with outside contractors.

“It is great that sentenced people are receiving the opportunity to work outside the MDC and prove they are ready to reenter society,” said Deirdre von Dornum, the attorney in charge of the Federal Defenders in Brooklyn. “But this ‘opportunity’ should not be a way for [the Justice Department] to evade the very fair wage laws they enforce. A person on the brink of release from prison needs an income to be able to obtain food, housing and other necessities when he returns to the community.”

The unusual Bureau of Prisons apartment complex comes complete with a list of rules for the jailers residing there.

The handbook specifies that inmate workers will not go into apartments to handle repairs without a prison agency staffer’s supervision.

The Metropolitan Detention Center currently houses about 1,700 inmates, including Ghislaine Maxwell and R. Kelly. The jail grabbed headlines in 2019 for a power outage on the coldest days of the year that left inmates shivering in the dark for a week.

To work at Dayton Manor, inmates must first secure a “gate pass,” which allows them to work outside the jail while supervised by Bureau of Prisons staff.

Besides Dayton Manor, other gate pass jobs include picking up food supplies and making pickups at the Brooklyn Navy Yard, Colville said.

Neighbors of the fortresslike apartment building did not seem to mind the inmate labor next door.

“I don’t care. They don’t bother me,” said a man named Kursof who lives opposite Dayton Manor. “I never see any trouble.”

“It’s the first I know about it and I don’t have any complaints,” said another neighbor, who declined to give his name. “I wouldn’t want a lot of guys, but as it is, it’s OK.”

The Bureau of Prisons declined to answer questions about Dayton Manor, citing “safety and security reasons.”