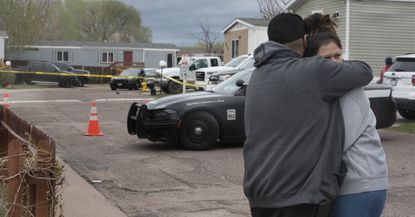 A woman who lost six members of her family when a gunman opened fire during a birthday party Sunday in Colorado Springs has identified the victims as her mother, her two brothers, her sister-in-law and her sister-in-law’s two siblings.

Nubia Marquez, 28, said the family was celebrating her birthday as well as the birthdays of her mother, Joanna Cruz, who would have turned 54, and her brother Melvin Perez, who would have turned 31 this week. Nubia Marquez and her husband, Freddy Marquez, left the party around 10 p.m. Saturday, about two hours before the rampage, she told local newspaper The Gazette.

The shooter, the boyfriend of one of the victims, fatally shot himself before cops arrived at the scene shortly after midnight, according to police. Authorities said they will only confirm the names of the victims and suspect once a coroner has positively identified the bodies.

The suspect, who Nubia Marquez knew only as “Junior,” apparently drove to Cruz’s mobile home while kids and adults were celebrating the three birthdays, walked into the trailer and “began shooting people at the party before taking his own life,” police said in a statement Sunday.

No children were hurt in the shooting.

Joanna Cruz and Perez were among the killed, Nubia Marquez told The Gazette. The others four were her older brother, Jose Guttierez, 21; Melvin Perez’s wife, Mayra Perez, 32; and Mayra Perez’s siblings, Sandra and Jose Ibarra.

Freddy Marquez identified the accused shooter as Sandra Ibarra’s boyfriend and said the man was “quiet” and always armed with a gun, according to The Gazette.

Joanna Cruz, meanwhile, was “hardworking” and loved by everyone around her, he told the paper.

“They were all great people,” he added.

Dispatch communications between the Colorado Springs Police Department and EMS suggests the shooting was still underway when first responders began heading to the scene.

“Sounds like more shots are still being fired. Keep your distance,” a dispatcher reportedly told first responders, according to a transcript published by local news station KKTV.

“We’re looking like we have multiple victims,” a dispatcher said after that.

The rampage is one of the deadliest mass shootings in Colorado’s history. It comes less than two months after a gunman killed 10 people at a Boulder supermarket.

“As the chief of police, as a husband, as a father, as a grandfather, as a member of this community, my heart breaks for the families who have lost someone they love and for the children who have lost their parents,” he wrote. “From the officers who responded to the shooting to the investigators still on scene, we are all left incredibly shaken. This is something you hope never happens in your own community, in the place that you call home.”

Police have released few details about the shooting and there was no word on a possible motive. The department did not return a request for more information Monday.