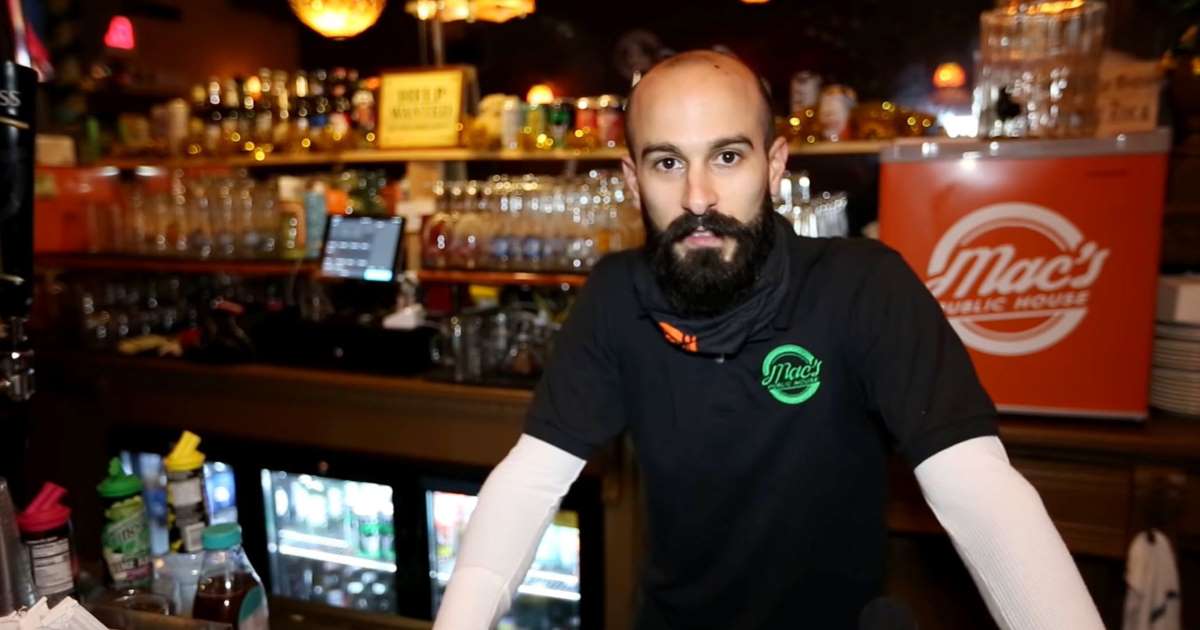 Presti, owner of notorious Mac’s Pub, hopped in his car and hit the gas, sending the deputy flying onto the hood just after midnight when officers tried to arrest him outside his bar on Lincoln Ave. near Edison St., officials said.

“He just doesn’t care about people’s lives. That’s what this comes down to,” Bill Neidhardt, a spokesman for Mayor de Blasio, said Sunday.

“He doesn’t care if his pub spreads a deadly virus. He doesn’t care if a uniformed officer is clinging for life on the hood of his car. It’s truly horrible and unacceptable and the people of New York City will reject this disgusting way of thinking.”

The New York City Sheriff’s Office had been conducting surveillance Saturday night on the bar, which has been a rallying point for people angry over COVID restrictions.

Despite blacked out windows obscuring the view inside the bar, deputies spotted patrons being led into the shuttered building next door then ushered through a secret back door into the pub where alcohol and food was being served with no masks, officials said.

Mac’s Pub had been shut down on Monday and it’s liquor license revoked after Presti continued to serve booze and food inside the bar located in an orange zone where restaurants are only allowed to serve diners outdoors or takeout due to rising COVID rates.

In an attempt to get around liquor license regulations, the pub released a video declaring they would stay open but serve alcohol for free, only taking donations. Despite the creative thinking, restaurants and bars need liquor licenses to serve alcohol, even if it’s free.

With enough evidence that the pub failed to follow COVID guidelines, the Sheriff’s Office laid in wait until Presti walked out after midnight Sunday.

Headed to his car parked near South Railroad Ave., two deputies identified themselves and stopped Presti, but the defiant bar owner ran off, hopped in his car and hit the gas, officials said.

Presti allegedly slammed into one of the deputies, who toppled over the bumper and clung to the hood as the bar owner drove the car 100 yards down the road before other officers stopped him, officials said.

Presti was arrested and taken to the 122nd Precinct stationhouse.

“The sheriffs hid like snakes in the grass and waited till Danny left to finally go home and get some rest! They had 6 undercover cars swarm him as he was getting in his car,” the bar posted on Facebook. “We will not back down! You have not scared us!! The world is watching and it’s time for everyone to wake up!”

A local basketball coach, Eric, 58, who lives near the bar, said that he was surprised by what happened.

“It’s not like they’re just singling him out, it’s a rule for everyone’s protection,” said Eric, who didn’t want to give his last name. “I understand he feels a certain way but you have to obey the law.”

On Nov. 20th, the pub declared itself an “autonomous zone” hanging signs outside stating it would not follow state COVID guidelines. The bar also launched a fund raiser Tuesday, raising over $80,000 in donations.

A rally on Tuesday drew members of the Proud Boys — and de Blasio’s condemnation, while some locals agreed that the whole situation has gone too far.

They [the rally participants] were drinking beer in people’s driveways… urinating in the streets,” said Eric.

The Proud boys, a far right organization, have been labeled a hate group by the Southern Poverty Law Center.