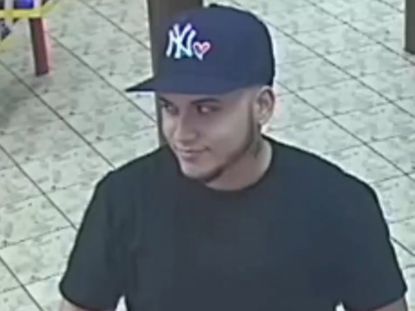 A cowardly customer at a Bronx fast-food joint slashed a teenage worker in the face during a lightning-fast attack caught on video, police said Thursday.

The 18-year-old employee was behind the counter at the Texas Chicken and Burgers near the Bronx Zoo on Crotona Parkway and E. 180th St. at 11:30 p.m. on July 23, when a customer in a black T-shirt and a Yankees baseball cap asked to speak to him.

The customer and a woman he was with wandered in and out of the restaurant for a half hour before asking to speak to a manager, cops said.

While the victim and customer spoke, both appeared calm and friendly. The patron winked and smiled at the woman he was with and shook the worker’s hand at one point, witnesses told police.

Then, in a sudden flash of anger, he whipped a blade out of his pocket and raked it across the teenager’s face, authorities said.

The slasher and the woman stormed out of the eatery and disappeared, witnesses told police. EMS took the victim to St. Barnabas Hospital, where he was treated and released.

Daniel Okyeredarko, the manager of Texas Chicken and Burgers said the wounded employee hasn’t returned to work since the attack.

“He’s a good guy, a hardworking guy,” Okyeredarko, 30, said of the victim, who has worked for him for at least five months. “I was home when I heard it. I didn’t even know what to say, it was crazy.”

Okyeredarko heard conflicting stories about what led to the bloodshed. Either the customer was upset that another employee was trying to chat up his girlfriend or the two men had a prior beef, the manager said.

“This area is full of crazy people,” Okyeredarko said. “There are things where people get aggressive about what someone said to them. I want to hear what actually happened.”

Cops on Thursday released surveillance images of their suspect in the hopes that someone recognizes him.