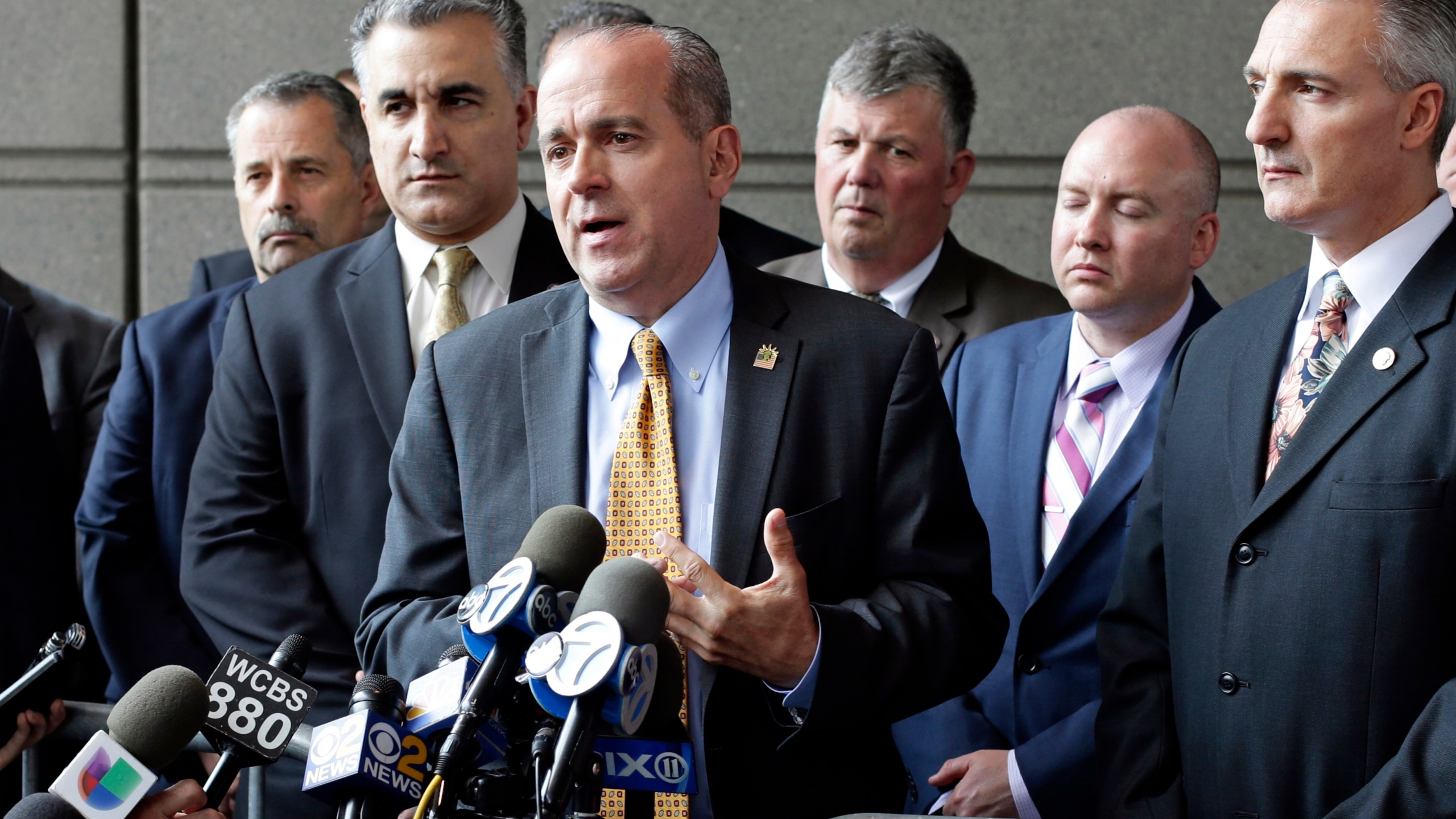 The controversial president of the union representing NYPD sergeants resigned Tuesday after federal investigators searched the union’s headquarters and his home.

Sergeants Benevolent Association President Ed Mullins resigned at the request of the union’s board, the board said in a letter to its membership late Tuesday.

“The nature and scope of this criminal investigation has yet to be determined,” the board’s letter said. “However, it is clear that President Mullins is apparently the target of the federal investigation. We have no reason to believe that any other member of the SBA is involved or targeted in this matter.”

A parade of FBI agents, clutching boxes and a black garbage bag, emerged from the SBA offices and loaded their cargo into a waiting minivan before heading off. One of the boxes appeared to hold a hard drive, and another was filled with what looked like electronics equipment removed hours after the stunning news of the probe became public.

While the details of the investigation remained under wraps, an FBI spokeswoman confirmed to the Daily News that the agency was “carrying out a law enforcement action in connection with an ongoing investigation” into the SBA shortly after the coordinated seizures began.

“Ed Mullins, who famously called me a ‘first-class whore’ for daring to ask questions about the SBA, just got a first-class raid from the FBI,” tweeted Rep. Ritchie Torres (D-Bronx) as word of the investigation spread.

A spokesman for the Manhattan U.S. Attorney’s Office declined to comment on the purpose of the raids.

Mullins was a brash leader known for his over-the-top social media attacks on NYPD leadership and Mayor de Blasio. A member of the NYPD since January 1982, Mullins took over as head of the SBA on July 1, 2002.

“No comment for now,” said Mullins’ lawyer Andrew Quinn about the morning raid. The typically outspoken Mullins could not be reached for a response.

Mullins was already facing an internal NYPD probe over his bigoted and profane statements on Twitter.

“I’ve long felt there’s nothing benevolent about Ed Mullins of the Sergeants Benevolent Association,” Torres told The News. “We’ve long known he’s morally corrupt. But maybe he’s legally corrupt too. He has no business in the NYPD … He should have been fired a long time ago.”

De Blasio, at an unrelated news conference shortly after the raid, said he had no further details on what happened. He then unloaded on Mullins.

“A lot of what he’s done has been really, really destructive — especially in the middle of a crisis where we’re trying to unify and we’re trying to get through together. I think he’s been a divisive voice,” de Blasio said. “All I hear is the FBI raid. I want to hear the details before I comment further.”

Mullins came under fire in 2020 when he posted the arrest report of de Blasio’s daughter, Chiara de Blasio, on social media following her arrest during George Floyd protests. Mullins was hit with departmental charges for the violation of NYPD rules.

In another instance during the pandemic, Mullins tweeted that the city’s health commissioner was a “b—h” who had “blood on her hands” after she sparred with the NYPD over half a million hospital-grade face masks.

He is an outspoken backer of President Donald Trump and visited Trump at the White House in February 2020. He grabbed headlines in July 2020 for giving an interview on Fox News with a QAnon coffee mug in the background.

In a piece written earlier this summer for the MailOnline, the Greenwich Village native tore into the soon-to-depart mayor’s two terms in City Hall.

“Since first taking office in 2014, de Blasio’s incendiary anti-police rhetoric has already resulted in three police officers being executed while sitting in police vehicles, Molotov cocktails being lobbed at officers and into police vehicles, armed assaults on police facilities, cops being pelted with debris, and wholesale damage to police and public property,” he wrote.

Mullins represented 11,000 members and was the union’s chief spokesman, weighing in frequently on a variety of issues.

“Like all of us, Ed Mullins is entitled to the presumption of innocence, and we ask you to withhold judgment until all the facts have been established,” the union board’s letter said. “However, the day to day functioning and the important business of the SBA cannot be distracted by the existence of this investigation.”