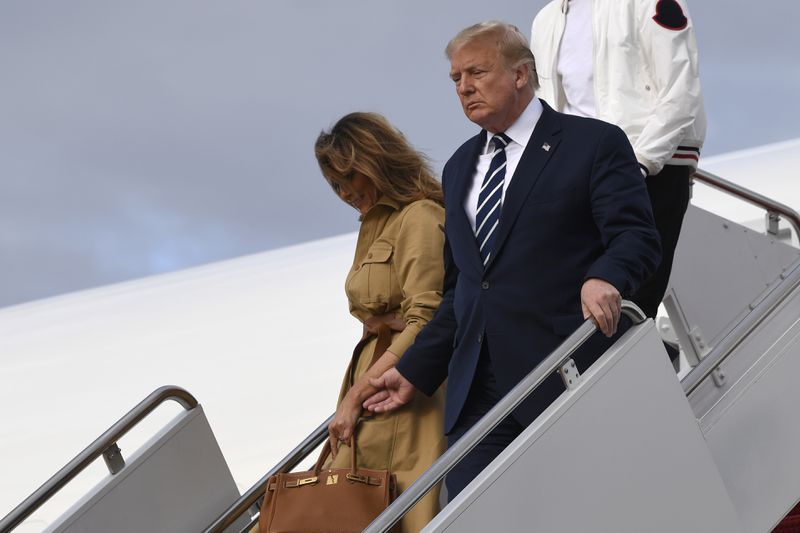 In the end, he got the girl.

Video of President Trump being rebuffed while attempting to hold the first lady’s hand has got the gossip mill spinning once more. Though unlike previous occasions when Melania Trump swatted away her husband’s palm, the two of them apparently wound up on the same page this time around.

The gripping moment occurred Sunday, when the first couple descended a staircase while exiting Air Force One. Their son Barron was in tow.

The president tried holding Melania’s hand at the top of the stairway and she pulled away. He made another attempt and was again unsuccessful as the first lady — using her left hand to hold a handbag and stop her dress from blowing open with photographers snapping away — used her right hand to clutch the carpeted staircase’s railing. She was also wearing high-heels in windy conditions.

The pair was soon after photographed holding hands on the Andrew’s Air Force Base runway.

Twitter exploded with critics guessing the first lady can’t wait until the pair moves out of the White House in January, which could happen if the president’s reelection bid in November falls short. Some suggested Melania might get her own place. Others insisted Trump and his wife of 15 years were doing just fine and will be spending their next four years together — in the White House.

Melania has on numerous occasions made news by not wanting to hold hands with the president in public. In 2018, the first lady’s elusiveness was linked to revelations that president allegedly cheated on her at least twice in 2006 when Baron was born, then paid the women to remain silent. The president denied those alleged infidelities. A collection of videos assembled by Indy 100 on Monday indicates Melania’s reluctance to hold hands with the president predates news of Trump’s alleged flings.

President Trump was widely mocked in June when he was filmed struggling mightily to walk down a ramp after addressing graduates at West Point. He later went to great lengths to explain that awkward moment by blaming his shoes, the weather and the ramp.