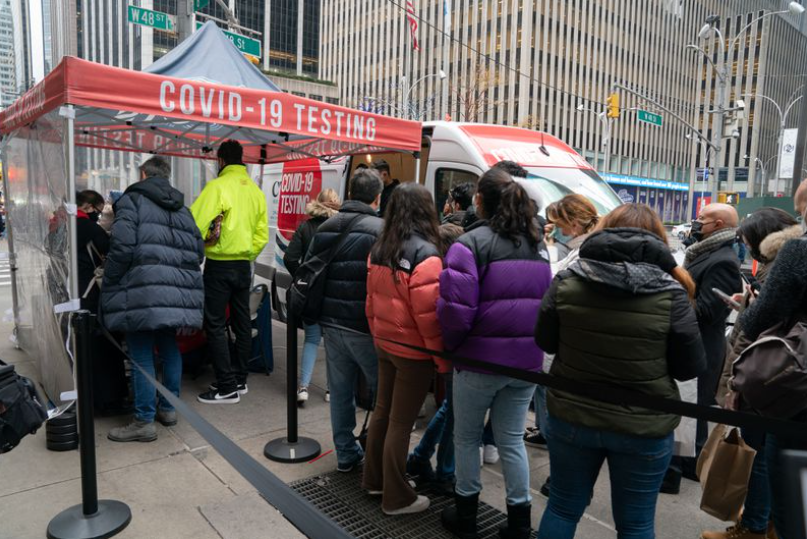 As winter break for city public schools draws to a close, some teachers and parents are still scrambling to find COVID-19 tests before classes resume on Monday.

City education officials strongly encouraged staff and students to get tested over the break as the more-contagious Omicron variant rages — and rolled out details of a plan Friday to prioritize testing for Deptmart of Education staff at dozens of sites across the city.

But some DOE workers said they were still hitting roadblocks Friday — encountering long lines or healthcare professionals who were not informed of the priority testing for Education Department employees.

Judy, an elementary school teacher in Brooklyn who asked to use only her first name because she is not authorized to speak, showed up at the Cumberland Health and Hospitals site in Fort Greene, Brooklyn, hoping to take advantage of “priority access” promised in a Friday morning email from the DOE.

But when she got there, a Health and Hospitals staff member said no one informed them of the special accommodations for DOE employees, she said.

“They said, ‘We’re not doing priority testing for teachers and you have to go to the end of the line,’” Judy said. She eventually pushed hard enough that the staff member relented and let her skip the line, but a colleague who didn’t push as hard had no such luck, she said.

The scramble to get tested comes as the city school system braces for the impact of a wave of new COVID-19 cases when classes restart.

Surging cases from the omicron variant battered the system in the days before winter break, with administrators reporting personnel shortages with large numbers of teachers out sick and massive backlogs at the “Situation Room” responsible for tracking and responding to new cases.

Outgoing Mayor de Blasio announced a plan earlier this week to deal with the surge, doubling the amount of student COVID-19 testing in schools and promising to distribute rapid tests to students exposed to a case in class.

DOE officials sent a letter to families “strongly encourag[ing]” them to get kids tested before Monday, but stopped short of requiring a negative test to return to class as some other districts have done.

Some critics, including incoming-comptroller Brad Lander, have called on the city to go further by mandating tests for all kids and staff before classes restart.

Officials from both the Education Department and teachers union said they were working to make COVID-19 tests — which have been in short supply for New Yorkers in recent weeks — more accessible to school staff during the final days of winter break.

The DOE sent out a list of 19 sites that were supposed to give priority access to school staff starting Friday, with additional sites offering the expedited testing starting Jan. 2, and five sites exclusively for education employees also opening that day.

That might be too late for staffers scrambling to make sure they’re not infected before returning to class.

Melanie Goldberg, a city teacher in Brooklyn and parent of a public school student, said she’s been getting her family tested weekly since the start of the school year, but has struggled to find tests over the break.

“It’s not easy” to find a test, she said. “If you haven’t been obsessively trying to find a test like I have, it means dedicating a whole day.”

Barry Gibbons, an eighth-grade teacher at Public School/Intermediate School 104 in Bay Ridge, Brooklyn, who spent his winter break recovering from COVID-19, managed to find tests at a local pharmacy for himself and his school-age kids.

But he worries that the program for regularly testing kids and staff once school restarts — even with the expansion announced earlier this week — won’t be enough to keep up with the record numbers of cases.

“I think it would be a worthy investment for them to be testing the student body more often,” he said.