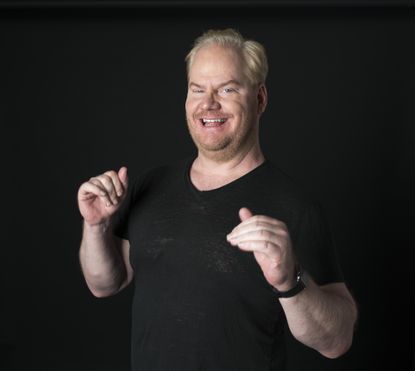 Comedian and food enthusiast Jim Gaffigan is supporting a third party in his own special way.

“About to start eating my third dinner entree,” the funnyman tweeted on Election night. “Not dealing with any stress at all.”

President Trump and Vice President Pence — an Indiana native — easily won the Hoosier state, which is where Gaffigan was raised. Though the family friendly comic is known for playing it safe, he made an impassioned plea for voters to shun Trump in late August, claiming he didn’t want to have to someday explain to his grandchildren why he didn’t take a stand.

“Look Trumpers I get it,” he tweeted. “As a kid I was a Cubs fan and I know you stick by your team no matter what but he’s a traitor and a con man who doesn’t care about you. Deep down you know it. I’m sure you enjoy pissing people off but you know Trump is a liar and a criminal.”

Gaffigan said he got threatening responses after his impassioned plea, but thinks many Trump supporters “are good, decent people” who’ve been fed a steady diet of bad information from media outlets like Fox News that are “biased and full of loons.”

The 54-year-old funnyman’s Election Day declaration brought out some nut jobs, but most of his Twitter followers supported his decision to eat away the stress.

“I listened to you talk about hot pockets on the way to work tonight as a stress reliever in lieu of the news,” tweeted one supporter who said she’s a medical doctor. “It helped immensely. Thank you.”

One of Gaffigan’s best known comedy bits is about his relationship with microwaveable Hot Pockets meals.

“Dr. Prescribed me 1 pint of Ben & Jerrys for each 45 minutes of election coverage today,” tweeted another fan.

Several people tweeted photos of their meals, beverages and antacids to Gaffigan. A Twitter used who tweets under My Children are not Vectors of Death – Trump 2020 hoped Gaffigan — a happily married father of five — gets his just-desserts for his Twitter rant over the summer.

“Good thing you lectured and scolded a bunch of Americans!” that person wrote. “I think you’ll see the fruits of that tonight.”

Gaffigan dropped by the Daily News in June 2016 to spend the day as a guest editor. Among the subjects discussed was a tweet wondering why some women get their nails done that drew heavy backlash. It inspired an episode of “The Jim Gaffigan Show.”

“The episode ends up being about how we’re all one tweet away from career suicide,” he said.