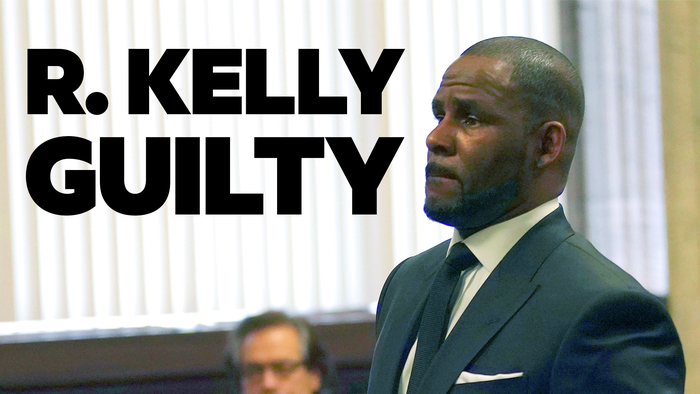 They believe R. Kelly can die — in prison.

A Brooklyn federal jury found the sex trafficking R&B superstar guilty on all nine counts Monday, delivering a verdict that could put him behind bars for the rest of his life.

The panel deliberated for just nine hours before convicting the “I Believe I Can Fly” singer of a decades-long sexual abuse operation targeting women and girls who attended his sold-out concerts, or met him in malls or even at a McDonald’s in Chicago.

Kelly did not move as the jurors read out the verdict, staring at his feet and at times closing his eyes. As the jurors exited the courtroom he stood and buttoned up his pinstripe blue suit, maintaining his composure.

“Today’s guilty verdict forever brands R. Kelly as a predator, who used his fame and fortune to prey on the young, the vulnerable, and the voiceless for his own sexual gratification,” acting Brooklyn U.S. Attorney Jacquelyn Kasulis said.

Kelly will be sentenced on May 4 by Judge Ann Donnelly.

More than 40 witnesses and 11 accusers took the stand during the 25-daytrial.

One after another, Kelly’s accusers and employees described a strange, alternate universe that existed behind the imposing gates of R. Kelly’s mansion in the Chicago suburbs, where “Rob’s Rules” were the laws of the land.

“It was almost like the ‘Twilight Zone,’ ” said Anthony Navarro, who worked for Kelly from 2008 to 2009 at the mansion. “Once you went into the gate … It’s just a strange place.”

Born Robert Sylvester Kelly, 54, the “King of R&B” rose to superstardom in the 1990s as his racy albums topped the charts. But accusations of sexual misconduct dogged the “Sex Me” singer as he toured the world.

His 1994 secret and illegal marriage to late R&B teen phenom Aaliyah — she was 15 and he was 27 — unnerved some of Kelly’s staunchest allies.

Demetrius Smith — Kelly’s former tour manager who bribed an official for a fake ID that showed Aaliyah was 18 and legally able to marry — told reporters that despite his role, he did not approve of the perverted union.

“I don’t have any sympathy for him when it comes to Aaliyah. He shouldn’t have did that. I should have called her uncle immediately,” said Smith in an interview Monday, as he cried about the verdict handed down to one of his old friends. “Yes, I’ll go visit him. Robert’s all alone man. He didn’t have no family there.”

The marriage dissolved and Aaliyah died in a plane crash in 2001. Kelly’s star, meanwhile, continued to rise.

He scored his first Grammy nomination in 1995 for his work as a producer on Michael Jackson’s “Past, Present and Future Book I” album. Kelly snagged three Grammys for “I Believe I Can Fly,” the inspirational hit written for the movie “Space Jam.”

With his career in decline in the 2010s, Kelly’s disgrace was sealed with the 2019 documentary, “Surviving R. Kelly.” The headline-grabbing series featured numerous women describing their abusive relationships with the singer over decades. He was charged with sex crimes in Brooklyn, Illinois and Minnesota later that year.

Still, those who remained in Kelly’s corner despite the allegations live-streamed and tweeted in support throughout the trial, calling his accusers money-hungry liars. A cohort of die-hard fans and friends attended each day of the trial, murmuring in approval as his lawyer cross-examined accusers. After court each day, they blasted Kelly’s music in the park across from the courthouse.

Women testified in Brooklyn Federal Court about the cruelty and violence that came with dating Kelly.

He beat girls and women with shoes, cords or his fists and delivered vicious spankings that left bruises when they broke his rules, the women testified.

Kelly referred to his spankings as “chastisements,” accusers recalled.

Chastisements could occur if Kelly’s girls looked at other men, lied to him or were caught texting people he did not approve of, they testified. Kelly forced the women and girls to call him “Daddy,” made them wear baggy clothes when out in public, and sometimes forced them to remain in rooms for days at a time until he granted them permission to leave, the women claimed.

The jurors found that the prosecution failed to prove two of 14 acts of racketeering, both relating to Sonja, a young woman who alleged that Kelly trapped her in a room in his Chicago studio in 2003 and sexually assaulted her.

Sonja said she was happy with the verdict.

“I’ve been hiding from Robert Kelly in fear, due to threats made against me, and I’m ready to start living my life free from fear, and to start the healing process,” she said in a statement.

Kelly’s lawyers had tried to argue their client was the real victim, targeted because of his celebrity status by girls and women who sought to leech off of him.

“They’re all working on those paydays,” Cannick said during closing arguments, referencing lawsuits women have filed against Kelly. “These folks are capitalizing. … You can’t blame folks for trying to make a living but that’s totally separate from trying to take away someone’s liberty.”

Assistant U.S. Attorney Nadia Shihata countered that the evidence in the case weighs against Kelly, and that it would take a conspiracy of dozens of lying witnesses for the singer to be innocent.

“He was just the unluckiest guy in the world,” she said sarcastically. “He doesn’t have just one person lie about him, he has upwards of 40, apparently.”

“He’s not unlucky, ladies and gentlemen, he’s guilty,” she said.