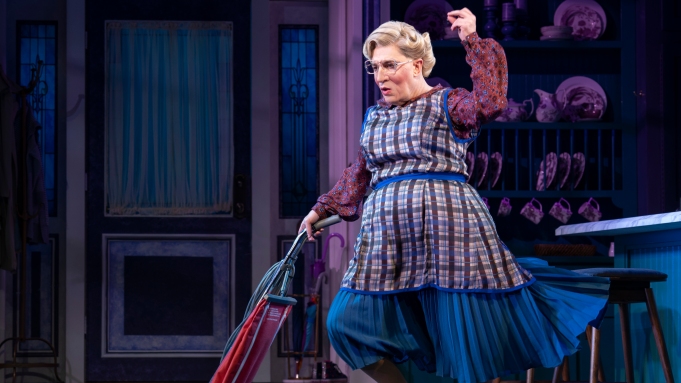 Just a month after officially opening, Broadway’s “Mrs. Doubtfire” is taking a two-month break in an attempt to save the show.

The musical is going on hiatus for nine weeks, from Jan. 10 to March 14, as the rise in COVID-19 cases has made the financial certainty of the production a disaster.

“The first few months of a brand new Broadway show are an extraordinarily delicate and important period of time. With the pervasiveness of the omicron variant of COVID-19, ‘Mrs. Doubtfire’ would have to close permanently if the production didn’t take drastic, pro-active measures,” producer Kevin McCollum said in a statement Sunday night.

The hiatus, McCollum said, is out of concern for “the potential long-term employment of everyone who works on” the show.

“‘Mrs. Doubtfire’ has been in development for six years.,” he said. “We are doing everything in our power to keep the virus from prematurely ending our run on Broadway. By taking this break we can afford to launch an extended run starting in March.”

The production began previews in March of 2020, but Broadway shut down before it was to officially open in April of that year. “Mrs. Doubtfire” returned for previews in October of 2021 when Broadway reopened, and finally had its opening night on Dec. 5.

Broadway has been hit hard by COVID-19, first in March 2020 when the virus rapidly spread through the U.S., and now again this winter as omicron rages. Last month, five shows shut down for good: “Jagged Little Pill,” “Waitress,” “Thoughts of a Colored Man,” “Diana” and “Ain’t Too Proud.” Several others, including “Hamilton,” have had to cancel shows due to breakthrough cases among cast and crew.

Based on the 1993 comedy of the same name, “Mrs. Doubtfire” follows out-of-work divorced dad Daniel Hillard who creates an alter ego, Scottish nanny Euphegenia Doubtfire, in a last-ditch effort to stay in his kids’ lives. Four-time Tony Award-winning director Jerry Zaks directed the show, with a book by Karey Kirkpatrick and John O’Farrell and music and lyrics by Wayne Kirkpatrick and Karey Kirkpatrick.

Anyone with tickets for shows that were to take place during the hiatus can exchange them for a later date or get a full refund for the price at purchase.