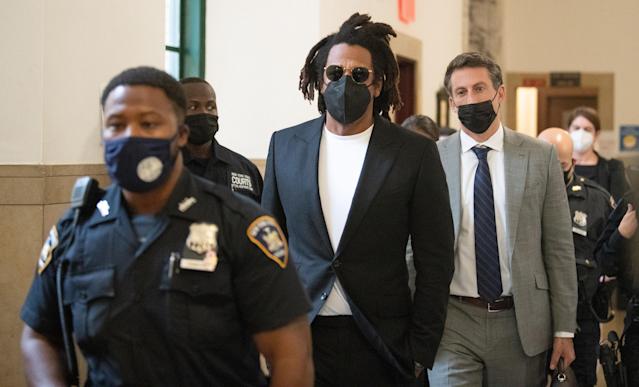 A combative Jay-Z called the work done by a perfume company suing him “lazy” and “crappy” when he appeared on the stand In Manhattan Supreme Court Monday.

The “Dirt Off Your Shoulder” rapper spent a second day testifying in the case in which perfume brand Parlux sued the billionaire, born Shawn Carter, for failing to make the requisite appearances to promote a collaborative celebrity perfume called Gold Jay-Z.

But on day two, a testy Hova tried to turn the case around on the brand, suggesting they put out subpar promotional content around the perfume release.

“I’ve always had problems with the quality of lazy work that was coming from Parlux,” he said in response to a question from a lawyer for the brand, Anthony Viola, adding later in the day that Parlux does “crappy, lazy work.”

Jigga also said he didn’t like a promotional advertisement for the cologne in which a nude woman was lathered in gold liquid.

“It’s a B-rate commercial and my name is on it,” he wrote in an email turned over as evidence in the case.

But he went even further on Monday, saying he “was being kind” when he gave it the B rating.

Despite the bad blood between the superstar rapper and Parlux, Jay-Z still wore the cologne and wanted it to succeed, noting it’s the only product he’s ever put out with his name on it.

“It was a tough relationship but I was still trying to make something great,” he said.

Jay-Z’s two days of testimony sandwiched his Sunday induction into the Rock and Roll Hall of Fame. He showed up in court Monday morning in a sharp gray suit and black tie.

In the lawsuit, Parlux accuses the “Black Album” rapper of not fulfilling his end of the contract, which required six promotional appearances for the fragrance launched in October 2013. Jay-Z has countersued Parlux over $2.7 million he says they failed to pay him in the deal.